We lost three employees during my tenure at my previous rather heartless and cold power company gig, and other than passing a card around, not much else was done except feel bad..... mainly because no one was really doing anything else.

At the new power company gig, it clearly is a family. It's like the fire department. I love my new job.

Howie's memorial service was billed as a celebration of his life. A large convention hall was reserved at one of the new hotels on the edge of town. A couple of bucket trucks were set up to form an arch and half-staff flag between the buckets that everyone drove under to arrive. And as a special touch, Truck 579 was detailed and shined up, and parked inside the building. 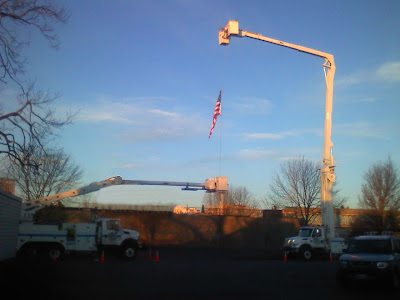 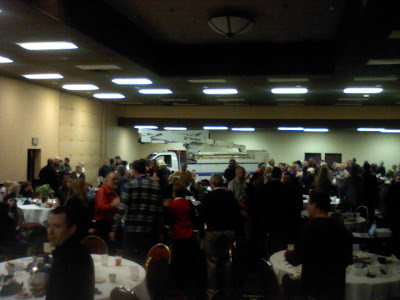 A catered dinner was served, and mourner/celebrants walked a long row of tables filled with pictures of Howie throughout his active life both in and out of the company, and stacked with memorabilia and artifacts of his power company career. All his current gear at the time of his passing was on a table, and elsewhere were his past helmets, certificates, mementos, awards. It was beautiful.

There were probably about 750 people in attendance. It took ninety minutes to get people to finish looking over the displays of Howie's life and quiet down for the slide show. My phone camera is ancient so the resolution isn't that great. 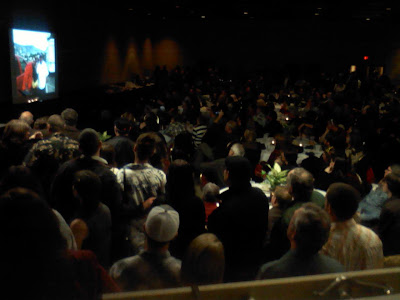 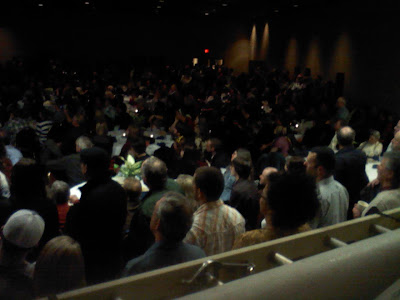 I found Howie's best friend and ran an idea by him, something we've all seen at firefighter memorials. It made him a little emotional, and he then ran it by Howie's widow to see if she would be OK with it. She was.

After the slide show was a group toast and a moment of silence. Then, from Truck 579's radio, came a voice.

"Dispatch to 579."  The room had been quiet already, but now you could hear a pin drop.

It's hard to describe how the room felt, but it was powerful. Bringing a firefighting memorial tradition into there was the right thing to do, and I've been hearing people express appreciation for it for over a week, again and again. I keep reminding them that it wasn't "me" that did it and I don't want credit, but that it worked because of the kind of guy Howie was. It was not easy for the dispatcher who called it out, either, and he also deserves credit for making it work when he couldn't be at the service and couldn't see its effect. It worked because when guys retire from here, it is a big deal to go 10-7 for the last time, but as Howie went out sick and never returned to duty, he didn't get his 10-7 moment.

We saw to it that it happened anyway.

This is a good company, and I am lucky to be in this family.