The new junior cadets are usually amusing to observe. They fall into a few different categories. I won't try to identify all of them, but some of the major names I use are "whacker", "zealot", "trooper", "student", and "roadkill".

Sometimes they move from one to the other over time. I try to move as many as I can into the "student" category, but some never escape where they started, and it is all you can do sometimes to simply keep them alive after they've been cleared for whatever reason to run calls with the duty crews. But we do manage to create an adequate number of decent contributors from them to make the effort worthwhile.

I used to just let them come along on whatever came up. When it was up to me, there were various unofficial loose limits that I would impose on their proximity to the subjects of the call, depending on what was up. That all changed on an otherwise fine late October evening when trooper cadet Sean was hanging out at the station.

That is never, ever good.

Sean was immediately excited, because he knew immediately that it was going to be a good call. As Jody, the senior medic, strode to the pole, Sean asked if he could ride the box. Jody didn't even pause, just nodded. I don't think Jody was thinking about Sean, he was already thinking about the good call, or rather how it wasn't going to be all that good.

I didn't think much of it either at the time, except for the aw crap sinking feeling you get in the pit of your stomach when you pretty much know exceptionally bad things have happened leading to this 911 call. I just joined the procession to the apparatus floor to take my place on the engine.

Medic 61 got a pretty good jump on us, but we could see them way up ahead of us as they turned onto the onramp, with a deputy coming from the other way and following them onto the highway. We were just approaching the scene when Medic 61 cleared us. There was nothing for us to do. There were two deputies on the scene, blocking the highway, just a couple of cars stopped. Traffic was light. The Captain didn't argue, and likely was as relieved as I was that we were let go. Conveniently, there was a median turnaround just before the scene, and we took it.

It wasn't more than 20 minutes or so when Medic 61 was cleared. After we got back, someone said something about Sean being on there. Well, it is what it is.

Sean got out of the ambulance as soon as it stopped backing up, stone faced. Gave a few half-hearted grins with empty eyes, and went to the bathroom. He waved absently as he went home shortly thereafter.

We never saw him at the station again.

Jody told us that the victim was missing a leg, and they asked Sean to stay in the safe zone behind the blocking squad cars while they helped look for it. Doing as he was told, Sean did. Morbid curiosity probably drove him to examine the striking vehicle, a full-size pickup. And very bad luck led to Sean finding the missing leg, embedded deeply in the smashed front of the truck.

Not a good welcome to the job for young eyes. Just that fast, Sean went from trooper cadet, one with some promise, to roadkill. Violently.

Sean might have eventually been a valued contributing member to the service, but the trauma of what he'd seen snipped him before he could grow into the role.

I don't know where Sean is today, but I think about him from time to time. And I have tried very hard to not let another cadet or probie get snipped. Some still leave for whatever reason, but we don't have to help them out the door by unnecessarily throwing them in to the proverbial fire either. Now, I evaluate most every call before I let the cadets come along.

Go easy on the new kids and give them time to grow into the bleak tragedy we sometimes face. Don't snip them.

Muttered under his breath by The Grumpy Dispatcher No comments:
Email ThisBlogThis!Share to TwitterShare to FacebookShare to Pinterest
Tags ems, fire, learning moments

A bit of a writing block lately. I just don't have much to say. I could open my mouth bang away on the keyboard, but making words appear does not automatically bestow value. I've already said too much.

If you happen to figure out who I am and perhaps work with me, you'll notice some familiarity in some some tales but that you don't remember it the way I do, nor some details the way I relate them. Fact is, brother, this is a blog, not a work of historical biographical nonfiction. I blend elements of different events into single tales, sometimes I can generate multiple tales from a single event without drawing a relationship between them. What it boils down to is that I would like to keep my anonymity as long as I can, and obfuscating some unimportant facts helps maintain that. The spirit of the event, the emotion, the essential outcomes, and the people involved, is all intact.

In looking over old posts, I realized that I have dropped the ball on the Tutorial series. Those were kind of fun. I don't know why they slipped my mind. If you're a relatively new reader and have no idea what I am talking about, you should go read this post: Tutorial 9: System Protection, Part II. If there is a specific subject in that series you want more of, let me know.

There have been many noteworthy/newsworthy events around me lately. Some I have been involved in, and some I have merely observed. Some involving the power company, others the fire department, and a handful where both were tangled up in it. It is kind of a drag, because I have a lot I would like to say about some of these things, but bringing them up would blow my cover. Lame.

I was deeply flattered to make this list: You Are What You Read - Fire Engineering Training Community. I have no business being in the same auditorium with those other authors, let alone singled out on stage with them. I am entirely unworthy. Putting me in that group drags the entire group's cumulative value down about 34%. Rescue them. Kick me off the stage, quick!

They all went to work that day just like you did today, with various marital struggles, unfinished hobby projects, financial planning doubts, vacation plans, teenager management problems, and put-off doctor's visits, just like you, and more or less expected to make it home the next day just like you do tomorrow.

They were us. We are them.

Stay safe, think of your families first, take care of the children. Do today what you'll wish tomorrow had been done before you lost the chance. All that.

Muttered under his breath by The Grumpy Dispatcher No comments:
Email ThisBlogThis!Share to TwitterShare to FacebookShare to Pinterest
Tags administrative

As I walked up and looked over the kid who had wrecked his bike, and the two bystanders who had stopped to help him, I could see pretty clearly why 911 got involved. One of the helpers was doing a fairly good job of elevating and immobilizing his broken tib/fib. He'd had a helmet on, and had no other obvious injuries. Not really sure how he did this, but here we are.

With nary a scuff on the helmet and not even so much as an abrasion found anywhere else on the head-to-toe, we could focus on the leg. Engine 52 arrived with a couple of guys, and we got a vacuum splint on the kid. The E52 captain prepped the kid to start a line, as the medics would surely offer him something for the pain when they got here.

Bah. When did I start calling guys in their late 20's "kid"?

Based on the relatively benign mechanism of injury evidence, it looking like he just tipped over and the catching leg somehow landed badly, I think we can skip the C-spine routine. (Thank MotorCop for the link.)

However, this is not my call, as I am outranked by the E52 captain, who follows protocol in ordering us to get the board and attach our patient to it. So be it. It is, after all, protocol.

Then a voice pops up behind me, asking why we're bothering with the neck brace and the board and trimmings.

"He's moving around fine. He took his shirt off after you got here. He doesn't need the board, why are you bothering him with that?"

I was on the same page a minute ago, but now I am in line with the captain, who is a good one at that. I turn around and give the guy a raised eyebrow, who are you kind of look.

Really, are we doing a cliché on purpose or is it just happening because clichés happen?

I want to tell him he knows full well as we do what medical control and establish standing orders tell us to do in this case. We all "know" he doesn't need the board, but that is not entirely our call, nor his.

I wonder how often he hates when people tell him how to do his job when he knows how it is supposed to be done. Assuming he does it the right way and legitimately should not be second guessed.

I run through all the witty things that I could say to shut him down. But it just isn't worth it. Just because a cliché happens doesn't mean it has to be followed to the end of its natural progression. I will not be a cliché slave. I bite my tongue and ignore the guy, and the cliché dies peacefully.

Much better that way.

Muttered under his breath by The Grumpy Dispatcher No comments:
Email ThisBlogThis!Share to TwitterShare to FacebookShare to Pinterest
Tags ems 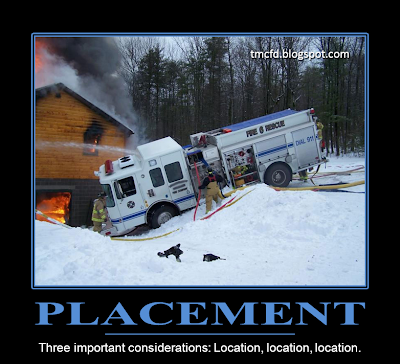