I'm the only seriously active firefighter in my part of the district, and living so close to Station 51 means when either rig rolls out of there, my voice is pretty much always the one on the other end of the radio.

When you've served this long in one place, the people in your neighborhood get to know you either by direct contact or word of mouth for both good and bad moves. Still, it surprises me sometimes how it comes about.

My father-in-law works in fleet management for a large transportation outfit a few hours from here, and was hundreds of miles from home at a business function, chatting casually with the regional safety manager for his company. Somehow they got to talking about home, and the safety guy mentioned that he lived in the same county that we do.

"Oh really," my father-in-law said, "my daughter lives around there, on Lower Valley Road."

"You don't say," said the safety guy, "I live right about there, too."

"Yeah, her husband is a firefighter there and usually runs out of the station up the road from you."

"Oh, you mean Grumpy and Mrs. Grumpy? You're telling me he's your son-in-law??"

The way it was told to me, the conversation went on with the safety guy saying nice things about us and how he and his neighbors appreciate both that I run so many calls for the neighborhood and that Mrs. Grumpy helps that effort by being awesomely supportive.

I've actually never heard of the guy. Never responded to his house. Point taken, though, that your reputation precedes you one way or another. It was a really nice thing to hear about.

So last week I took in a middle of the night call for a medical emergency. The address was familiar, as the guy has had a few medical issues in the past, but I hadn't been there since 2009. I walked in and said "Hey Barry, it's Grumpy from the fire department, been a while since I've seen you, what's going on this morning?"

I heard the wife's voice in the dawning of comprehension as she said "You're Grumpy??"

Seems Barry was suffering stroke symptoms, and while he seemed to be bouncing back from what I assume ended up being a TIA, he was at that moment still struggling to speak clearly. As I put him on a high flow NRB and collected vitals while awaiting Medic 97, his wife explained that she woke up when he was acting strangely. The only thing she was able to make out before deciding to call 911 was "Call Grumpy." She had no recollection of my name, and was thoroughly perplexed. Now it made sense.

When Barry was fearfully struggling against the fog of a stroke, of all the things he might have wanted to say, it was my name that he punched out in his plea for help.

I am seriously and substantially honored and humbled at how that played out. I'm just a small cog in the big machine, but point taken that when the chips are down and the people call us, our arrival leaves a powerful impression for good or bad.

Reputations and impressions last a long time. Carefully ensure that you are investing in making the right ones.

Barry's home again and made a full recovery according to what I heard. I'll have to go by and see him this week. I am, after all, the neighborhood beat fireman, and should know my people.

Muttered under his breath by The Grumpy Dispatcher No comments:
Email ThisBlogThis!Share to TwitterShare to FacebookShare to Pinterest
Tags ems, fire, thoughts

The next update has a chilling effect.

Rollover and over an embankment, six patients, some ejected. However, dispatch does not actually know where the scene is. The call came through Hazzard County 911, and Mayberry FD is already looking for it on their side of the line along with the Mayberry ambulance service.

The place they dispatched us to is associated with info that Hazzard County gave our dispatchers regarding a cell phone ping. But then our dispatchers mention a road name that was in the conversation that is nowhere remotely near where we've been sent. In addition, the caller is apparently one of the patients, and is describing terrain in no-man's land way down south that fits with the alternate possible location.

54, 21 and the medic will continue to the original scene to check, but the new spot is now behind me and closer to Mayberry. I divert to the new location, which will make me drive back right past Station 51, and flop from our TAC channel over to the Hazzard County channel to see what they know. Not much, except that the Hazzard County ambulance is already on scene asking for assistance yet no one seems to quite know where they are or how to interpret their directions. Units are scrambling to communicate on our TAC channel, Hazzard County's dispatch channel, and a shared inter-op channel that we should all be using but not everyone has access to. This in addition to the fact that we're on the fringe of radio coverage for any of these channels.

I arrive at the end of the world, where roads stop having reliable names. A couple of Mayberry units are there. The Mayberry Chief hustles up to me to let me know a second Hazzard County ambulance just went by them a few minutes before, but they don't know where it went.

Seriously? You didn't think of following the medic if it seemed to know where it was going? Oh well, this is their call, we are the mutual aid, so I tell the MFD Chief that we have another engine on the way and ask how we can help.

He gives me a blank stare for a half second, and then as if he didn't hear me, he asks me where the call is at and what we want them to do. 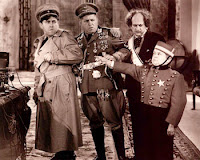 We have thus descended into Charlie Foxtrot status.

We thought it was their call, and they apparently thought it was our call. No one has Command, no one knows where the ambulances are, and everyone is scattered on three radio channels.

Cue the Southwest Airlines catchphrase: Wanna get away?

We are - in our present literal location - technically in our district by about 15 feet, though the roads into no-man's land head mostly into Mayberry territory. This could be anyone's call. But OK, I can take it.

Now with a reliable starting place to work from, I managed to get enough information from the ambulance to guess where they are, and with that, we're off into darkness.

After about five miles of that we come over a rise and find an ambulance coming toward us. Great, are we ALL lost?

No, as it turns out, this medic has two patients aboard. The other Hazzard medic has one patient aboard and is coming up behind them. There were never more than three patients, they are all loaded, and there is nothing left to do. They thank us for showing up, and off they go to the hospital.

You could just sense the deflation of everyone's adrenaline when I got on the radio and told everyone to just go home.

True to past performance, massive communication breakdowns between 911 agencies. Hazzard County 911 gave our dispatchers an address near a cell phone tower in our area, and the other road names out of our area carried no meaning and were ignored. We got sent to the tower. The tower.

Too many radio channels, with too many people talking on them. The Command vacuum empowered everyone to chatter until confusion reigned.

The first unit on scene failed to initiate Command. The first officer on scene also failed, as did the first Chief. It should never have fallen to me as first-arriving M/A representative to recognize that and try to fill it.

We're not perfect, I make plenty of mistakes, but this Charlie Foxtrot was worse than usual, and oh-so-preventable with basic communication skills.

It could have been worse, I guess. Argh.