Now that it's been three years, I am looking at what I am doing here and wondering if it is time to call it a day.

Not the Job or the other Job. The blog.

I was pretty unhappy with the absurdities of my previous power company, and needed an outlet to blow off the pressure. Since changing companies back in September, everything is better. Sure, there are annoying goofballs here that can annoy the hell out of anyone, but it is nothing like before. As such, the once abundant fount of rant material has mostly gone dry, and as it turns out this blog was mainly a rant vehicle all along.

After rants, the secondary source of material was memorable calls and experiences over the nearly 20 years in the fire service and 15 in the power company line of work that I have seen. That source, too, has dried up as the best tales have generally been told.

Unlike MotorCop and the Happy Medic, both major inspirations for me to start this blog when they appeared as rant vehicles, it doesn't appear that there is an obvious or useful path to take towards re-characterizing what this place is and will be from its humble ranting beginnings. I just feel like there isn't anything of value to offer.

There just doesn't seem to be any good stuff bubbling up and wanting to be put to words any more. As the lag between posts here increases, readership has logically dropped. We opened a Facebook page quite a while ago and so far there are less than 10 people in it. (Actually, that's kind of embarrassing.)

This is not a pity party, and I don't need the love, I get plenty of that already. This is merely an attempt to be objective about if this should continue and how many people would be put out if it ended. Objectively it looks like this might be it.

So, while this gets pondered over the next week or two and the blog faces a likely shutdown, please let me know if there are any loose ends I promised to get back to and forgot about, or any job/industry specific questions (mainly power company stuff) that you'd like addressed.

It's been fun. As one of my favorite authors often writes on his blog, thanks for reading. Really. Thanks.

Muttered under his breath by The Grumpy Dispatcher No comments:
Email ThisBlogThis!Share to TwitterShare to FacebookShare to Pinterest
Tags administrative 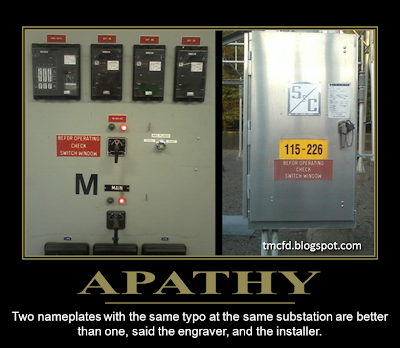 Two nameplates with the same typo at the same substation are better than one, said the engraver, and the installer.

And hey, as long as we're posting pics, this one is due for Tuesday.... amazing to me that this is still alive after this long.