He'll sit this one out

As technology has improved, and electronics widgets get smaller and smaller, I wonder at what point things will stop shrinking. Portable radios are getting pretty small, and cell phones downright tiny. Yesterday's cassette-playing Walkman could give you around 12 songs from the one cassette you put in it, but today's eraser-sized MP3 players can serve up many hundreds of tunes. At some point the shrinkage has to stop so we don't just lose stuff outright. Can't you see it coming? Oh my gosh, I just lost my cell phone down the sink drain! Help!!

Those of us who've been around a while know it wasn't always like that.

I was working a fill-in shift for a career guy out sick. It was sometime after midnight, and everyone had either hit the sack or dozed off in the recliners. The horn sounded and the lights came on for a routine-sounding medical call. Tony, Clark and I were were on the Medic. Tony was on the recliner so made the pole first, with me right behind and Clark coming out of the dorm behind me. 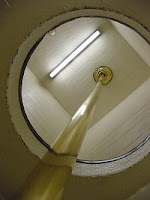 As Clark hit the pole and spun around on it with flair, his Motorola HT600 portable radio, a classic "brick" piece of hardware, was swung out slightly by the centrifugal force. The bottom of his radio caught the edge of the "pole hole", and as Clark went down, the radio was stripped from his belt clip and stayed behind on the edge.

But just for a second. Then, it too decided to go downstairs the fast way. 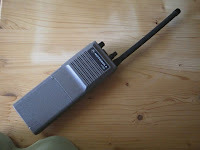 Clark hit the pad, but before he could take a step, his HT600 clobbered him on the skull. Hard. Those HT600's were heavy enough to be used as a last-resort blunt force weapon, so having one dropped on your head from 10-15' is sure going to leave a mark.

Clark grunted and went into a crouch, holding his head. Tried to shake it off. Reached for the radio and lost his balance, sat on the floor, head in his hands. It was at this point I noticed something was wrong.

"Radio hit me in the head. Give me a second."

He stood up, a little unsteady, and then climbed into the rear of the medic. I watched him as he sat down on the bench and tried to focus.

Clark was a little shaky as he climbed back out and sat on the floor. Tony came over to see what the delay was, and the consensus was that we'd just take the call with two guys, Tony told Clark to go wake someone else up and get looked over, and off we went to whatever it was we were going to.

Clark ended up taking the rest of the shift off but stayed at the station until shift change. I think someone else drove him home in the morning. He recovered.

We were all a lot more careful about the state of our various accessories when going down the pole after that.

Muttered under his breath by The Grumpy Dispatcher
Email ThisBlogThis!Share to TwitterShare to FacebookShare to Pinterest
Tags fail, fire