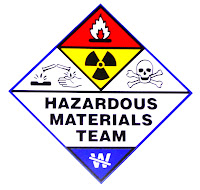 Haz Mat calls, while frequently interesting and sometimes exciting, are not really my forté. Since my FD has no one beyond "Operations" level, which isn't really much more than evacuate, exclude and identify, mostly we stand around and wait for the big boys and their big toys to save the day.

Sometimes, however, you're right there, with no higher qualified help available, and have to take action up to your capabilities as long as your safety is not compromised. Last night was just such a case.

I was in bed when the call reached my ears. I was tired and didn't want to go, but that's why we get paid the big bucks. Up, dressed, and out we go.

I arrived second, and found that the first person on scene had taken command, identified the spilled substance, and was already deploying absorbent materials. Sometimes arriving late has its benefits. Command of a Haz Mat call? No thanks.

The IC advised me that she had already cleared the area of the few bystanders around, and I saw them not far away, watching us with some interest. What do you need, I asked? More absorbents? OK, and I went to clean out my supply accordingly.

I independently verified that the spilled substance was what she had identified it as, and while an unfriendly material, it was not especially hazardous, and required only minimal PPE. As such, no further resources were requested. No need to call everyone out without cause. Besides, that costs a lot of money and we taxpayers have less and less of that lately. Fiscal responsibility of responders is in vogue, you know.

But yuck. I noted papery materials in the spill, and as we now had enough absorbent down that it was no longer spreading, I was able to approach the source and verify that the spill was contained.

Indeed, although the plunger was still in the toilet where one of my sons had dropped it in a panic when the flood began, the level had receded an inch or so below the top of the bowl.

The IC had been trying to close down the house for the night when the incident occurred, so I released her from the call and finished the mitigation myself. And as we don't have an unlimited supply of absorbent materials, I could not just throw my used ones out. I carried a lot of towels to the laundry room.

On the job training is useful everywhere, isn't it?

Cleanup complete and cause resolved, I was back in service. I went back to bed. Very early day shift coming up, you know.