Identifying the T-Shirt Firefighter in its Natural Habitat

This is a Public Service Message. Don't be a T-Shirt Firefighter (TSF).

I'd like to assist you in identifying a TSF should one be in your vicinity. You may be acclimated to their presence and no longer recognize them. Worse, you may be one and not realize it. Acknowledging you have a problem is the first step to solving it. I recovered. So can you.

A TSF is a firefighter who attaches more importance to wearing a uniform fire department T-shirt than knowing or doing the job itself. TSFs come in all varieties: Career, part-time and volunteer, even non-firefighters have been known to be a TSF. A TSF will wear a uniform T-shirt to all events, even a wedding or funeral, just so everyone 'feels safe' and the ladies know or assume his career.

When wearing a uniform T-Shirt, the TSF will make sure his back (with the largest-possible white lettering "FIRE" etc.) is frequently flashed towards other potential alpha males in the room to discourage them from approaching mating females near the TSF's territory. 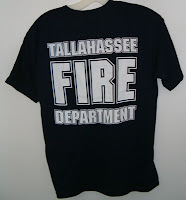 Fledgling TSFs may attempt to mimic older, experienced Real Firefighters in ways similar to certain insects that have evolved markings to resemble something different and generally more dangerous in order to ward off enemies. One such method is to repeatedly wash and wear their shirts so that they look well-worn. This leaves the impression that their plumage has naturally faded due to exposure to The Job. This actually is quite easy to accomplish, since they wear the T-Shirt almost every day anyway. It is frequently possible to distinguish the TSF from the Real Firefighter by comparing the relative age of the wearer with the apparent age of the T-Shirt. When the T-Shirt appears older than the wearer, you have likely found a TSF. There are exceptions, as some TSFs live to a fairly old age. Actual Firefighters use old shirts for painting, working out or sleeping, but never on duty or in public.

Sophisticated TSFs that have evolved beyond the basic T-Shirt appearance have developed alternative plumages which come in many forms, a few examples of which are below. 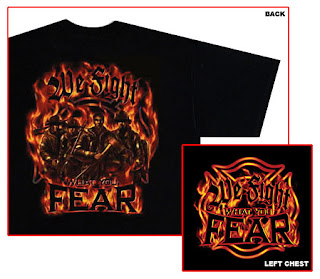 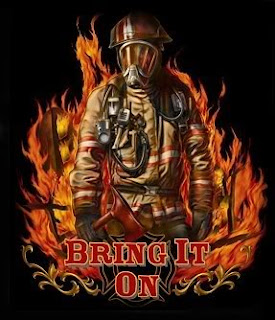 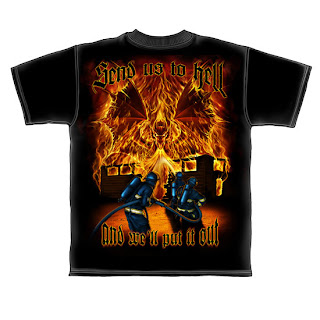 More mature TSFs which desire something additional to display to other potential alpha males than their shirt alone have adapted accessories to this purpose. The preferred accessory is a portable radio, especially when a simple pager would otherwise be adequate. Newer modern compact designs are beginning to gain popularity but there is still no substitute for the unmistakable bulk of the Motorola HT600 or MT1000. Additional radio size can be gained by wearing this radio using a leather wraparound holster hanging off of a belt or a shoulder strap with a reflective stripe, and additional flair can be added by labeling the radio or holster with "METRO FIRE UNIT 565" etc, using reflective or high contrast materials in the largest size possible. This is as close as a pedestrian can come to resembling a Big Red Truck.

Fledgling TSFs can compensate for their lack of radio by obtaining a hand-held scanner from Radio Shack and affixing similar labels to disguise their decoy scanner as a real radio. In all cases, the radio accessory can be enhanced by insisting on wearing two or three pagers and a cell phone alongside it. Seasoned accessorized TSFs usually are unable to wear their pants level due to the resultant drag on one side, and the many accessories may even cause a slight limp over time that can conveniently be implied as an old firefighting injury.

TSFs not satisfied with the radio accessory alone have adopted some behaviors exhibited by the T-Shirt Medic (TSM), namely equipping themselves with pocket CPR mask carriers which are replaced as soon as the printed "CPR MASK" wears off the case. The second most-favored borrowed accessory is the glove pack, rendered most effective if the ends of two gloves are visibly hanging out of the pack. Other variants on this behavior include displaying shears, seatbelt cutters, first aid tape, penlights, etc. It seems inevitable that evolution will eventually result in a day where TSMs will attempt to carry a small six-minute O2 canister strapped to their leg, an ability which will no doubt soon be passed to the most advanced TSFs.

The mating call of TSFs - which they may continue to broadcast despite its dubious effectiveness - is the sound of a pager or radio dispatching a job at the loudest possible volume in any part of their natural environment, which includes worship services, movie theaters, formal dining establishments, etc. A determined TSF also uses the mating call of competing TSFs as well as Real Firefighters by emitting the mating call of every agency within a 50 mile radius as if it were its own, and showing grave concern over "white smoke seen coming from a chimney" for an agency three districts away. When actual mating possibilities seem dubious despite the mating call, the TSF may attempt to save face upon their exit by departing as if off on an important mission, regardless of whose mating call was actually used in the failed attempt.

Now that you can reliably identify the TSF should one have established their habitat near you, you are able to avoid or rehabilitate them as seems prudent to your situation.

That is all. Be safe today.

Muttered under his breath by The Grumpy Dispatcher
Email ThisBlogThis!Share to TwitterShare to FacebookShare to Pinterest
Tags ems, fire