How to Capture and Visualize 60Hz

100 years ago, many AC systems were operated at 25Hz (25 cycles per second), and pretty much anyone could detect it when looking at a light bulb. You could see it pulsing really fast. At today's 60Hz, it is pretty much impossible to detect that pulse in an incandescent light bulb, because the filament does not have enough time to noticeably dim between the 60-times-per-second pulses.

Unlike incandescents, fluorescent lights visibly pulse to some people whose eyes are sensitive enough. Like mine. I can see the flicker of computer monitors set to 60Hz, too. Both give me headaches. Many monitors have configurable frequency settings, so I change them to as high a setting as possible. If I can't, the monitor is disposed of.... somehow I usually find a way. And of course I avoid using fluorescent lights as much as possible.

But there's a relatively new flicker-detectable 60Hz light source out there, and I probably can't run away from it:  Cheap LED lights.

LEDs are either ON or OFF. There is no 'warmup' or 'cooldown' interval.

Have you ever seen one of those spinning light gadgets sold at gift stores, with the LEDs on it? As they spin, the lights make various multi-colored solid lines or dashes or dots, rotating back or forward, and they are fabulous for mesmerizing cranky 2-year-olds for a few minutes.

Next time you get your hands on one of those, grab the spinner so it can't turn, and then turn the thing on. These are battery-operated, so they are not strictly 60Hz, but run at variable frequencies controlled by the internal circuitry. You'll note that, when the spinner is not spinning, the LEDs are constantly changing in their intensity. Brighter, dimmer, to varying degrees. What you are seeing is the pulse rate affecting how much total light they give off. When the LEDs are stationary, your eyes detect the difference in total light delivered as brightness, but when spinning you can see the actual pulses as the dark gaps between the lines and dots in its rotation. Cool, huh?

So there's a lot of Christmas lights that are LEDs now, and I can tell them from the old ones instantly by their flicker. I was at a big Christmas light display with hundreds of thousands of these LED lights, and I about went nuts. Since these are AC, they always pulse at 60Hz. How to visualize that when they don't spin? I used my cell phone camera, and swung my arm quickly sideways while taking a picture of the lights. Can't rotate the lights, then rotate yourself. The result is below. 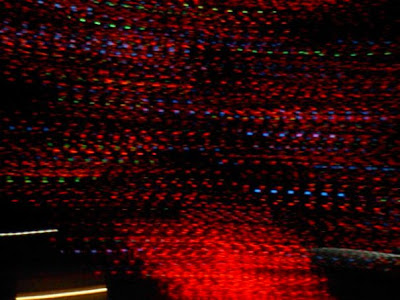 There's lots of reds in there, but only a few blues or greens. Count the number of blue dots captured from one of these lights, and you'll see that my cell phone camera captured six pulses. At 60 pulses per second, that means my camera caught 1/10th of the pulses delivered every second.... so now I know that my cell phone camera's exposure time is 1/10th of a second. Incidentally, there are a couple of white incandescents that got caught in there on the lower left, and you can see the intensity of one of them oscillating, though it never has enough time to go out between pulses, hence the pulses are invisible to the normal naked eye.

I know it's late, but Merry Christmas!