What happens when someone gives a stop paddle to one of the goofballs?
So I am on my way to work at the power company, still frosted about the switching error, otherwise minding my own business. I have arrived at a cloverleaf, passing underneath and getting ready to do the 270 and get on the other highway, when...

An aside: I know not many people do this, but Dad taught me to always look as far ahead as possible when driving. It's easy to spot the people who don't do that by noticing who gets surprised by being caught behind a bus at a stop that you yourself saw three blocks ago and changed lanes to avoid. They're all like "Where did this BUS come from??!" Duh. 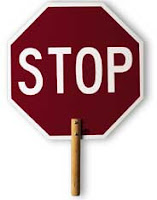 Looking ahead during the approach, I noticed no backup on the upper highway, no backup on the ramp, so whatever is going on has just happened. I am about ten cars back and I still see nothing on the ramp. The cars stopping behind me are already blocking cars coming off the other 270 to pass under the overpass, backing them up on the curve. A collision back there feels imminent. I first assume that a wreck has just occurred, so, first checking behind me for other goofballs about to try the same stunt that I am, I then pull onto the right shoulder to approach, mentally remembering where my POV med kit is.

What do I see? A small pilot car for an oversize load convoy. He's just stopped in the middle of the lane, amber lights on, holding a stop paddle out the window. There is no oversize load truck in sight. He's watching a ramp for the truck to approach, but it is nowhere to be seen.

You have got to be kidding me, right? Daily tip: Close traffic right when you need to, but not until then. That's what radios and phones are for, to coordinate the timing. And do it in a position that doesn't cause cross-merging traffic to back up convergent paths. This is the dumbest possible place to pull the stunt he's pulling.

In some states and locales, fire and rescue folks have been arrested for closing the highway in order to protect fire and EMS crews. I know this isn't typical and don't mean to poke at my brothers in blue. I am just illustrating that even we fire guys don't have the authority to close the highway all the time, and better have a good reason when we do. And here's this goofball, sitting in his car, closing the highway in a very dangerous way and without immediate requirement, from the comfort of his front seat.

So I hesitate a bit to see if the big truck is going to appear. Waiting. Waiting. Waiting. OK, no truck, so I continue on up to where he's at. I can feel the evil stares of people I pass, who assume I am just going to zip by everybody. But I stop behind and to the right of the idiot, and get out, ready to give him a piece of Grumpy Dispatcher mind. Remember, I am still frosted about the switching error, and that was days ago.

No sooner do I get out and take about three steps to engage the idiot, and I hear a siren blurp at me.

Hello, Highway Patrol! The cavalry has arrived. I grin widely at him and give him the thumbs up, but I am in his way. He nods. We understand each other. I move my vehicle, and he moves up to engage the idiot.

I poke my nose out behind the Crown Vic. I roll down my window for a listen. I can hear his tone, he is not happy. Idiot quickly turns off his 'I think I am in charge but I am not' amber lights and pulls to the side. All those people back there who delighted in glee that I got followed to the front by a State Trooper are awaiting my turn to get tagged by the law.

Imagine their disappointment as he disengages to open the lane, me behind him, and off we go. End of incident.

Wish I had caught the name of the company with that flagger. That really warranted a follow-up call before he gets someone killed.

Idiots with stop paddles. Who knew?

Muttered under his breath by The Grumpy Dispatcher
Email ThisBlogThis!Share to TwitterShare to FacebookShare to Pinterest
Tags fire, law enforcement, rant