When I took the job at this uber-large electric utility, I noted during the interview phase (which is very much a two-way exchange) that the company provided not just coffee, but also hot chocolate, hot spiced cider, more than a dozen varieties of tea, microwave popcorn, and several other little kitchen-based perks. They don't buy your lunch outright, but the extras can smooth over some of the daily annoyances.

That ended a few months ago. We dispatchers noted that supplies were running low, and eventually were depleted. We raided the stocks of some other departments housed in the ECC to carry us a little longer while we waited for a reply on our inquiries about who dropped the restocking ball.

Finally it came out that the company was no longer going to buy anything other than coffee, filters, and creamer. We even lost the flavored creamers (oh how I miss the Irish Cream stuff). We were a little put out that the notification didn't come out until after the stocks were gone, but who asks us our opinion on anything other than shedding firm electrical load to save the free world?

OK, reality check. In this economy, anyone should be lucky to have a job at all, let alone one that provides you with cable TV, coffee, secure parking, and the internet to entertain yourself all night when the grid is humming along without incident. Just understand, I am not complaining loudly about the loss of the other perks, because honestly, I've still got a GREAT gig doing a job I really like doing, and getting paid more than I am worth to do it. If I really wanted to whine about it, it would have been a blog post back when the stuff disappeared.

As you may recall, a new, unnecessary, and unresearched refrigerator recently showed up. That brought out some derisive comments, of course. For what it is worth, the fridge situation is so far unchanged, it sits sideways in the corner, sticking out into the room. 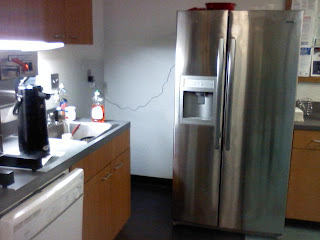 Then, other stuff started to show up, unannounced and unrequested. Nice stuff. Color-coordinated, even. A nice set of knives in a block, a toaster oven, a hotplate (which I've still never seen used), and ... a popcorn maker? We got rid of company-issued microwave popcorn and then bought this? There's more, but these things were grouped nicely together. The new red-handled silverware sets look good, too. 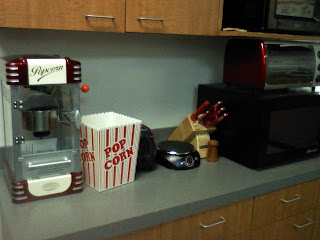 Then the new dishes showed up. No one asked for new dishes. We liked our hodgepodge collection of oversized bowls and coffee mugs, and everyone had their personal favorites or brought in spares from home. Gone, and replaced with this cheesy... square-ish set. Shown next to the now-empty flavored coffee creamer bins. 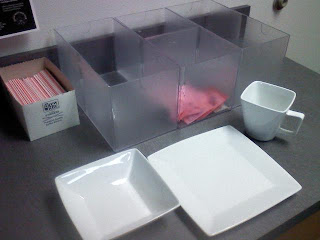 Now this was about the limit. You ever try to eat out of square dishes? It's goofy. Must drink from a corner (which feels like drinking from a porcelain milk carton), because drinking from the flat sends coffee down your cheeks and off your chin. How about stirring microwave ravioli or instant oatmeal in a tiny, square bowl? Breaking News: It is tricky to stir anything in a square container. If anyone had asked us, we would have advised accordingly before this undersized cuteness was purchased. But alas, no, those that actually, you know.... use this stuff, were not consulted. Without a true, full kitchen, there's a lot of instant this and quick-stir that made here. Dinky, breakable, square dishes do not belong in this environment.

And then this showed up. 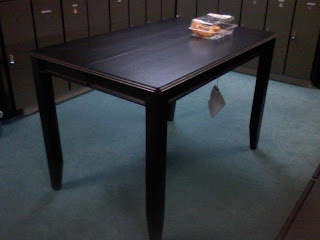 Gone was the old, indestructible formica-topped circular table. And its chairs. Here is this new, shiny, fancy, black-finished $750 counter-height wood table with internal expansion leaf. And no chairs, seeing as how the old ones weren't tall enough for the new table. What, did you just say $750? Yes. Seven Hundred and Fifty Dollars. For a table we didn't need or want, that we can't sit at anyway. But since we skipped the chairs, I suppose that we saved a few bucks.

The crews soon realized: Do you have ANY idea how much hot chocolate, coffee creamer and spiced cider mix you can buy for the ~$2,000+ we just spent on un-asked for and un-researched "upgrades" that mostly were a step backwards for us?

Management says it was facilities money to be spent or forfeit, from a different bucket than the goodies used to be paid for with.

As I tell the new kids when they ask certain questions: "Junior, how many times do I have to tell you to leave your bag of logic at the door? It has no place here."

Still waiting to see if we remodel to fit the new fridge that was not needed, never asked for, and ultimately a downgrade. Probably red countertops (to match the spoons) will be included.

Muttered under his breath by The Grumpy Dispatcher
Email ThisBlogThis!Share to TwitterShare to FacebookShare to Pinterest
Tags fail, kitchen remodel, office goofiness