Friday morning I am off with one of my young sons for a church group camping trip, we're going to a remote lake with zero amenities in the mountains that can only be reached by foot. The group has been there several times before, and it is our second time along. Seems like there is much to be learned every year. Some observations to follow.

We have driven a couple of hours into the wilds of nowheresville, the last several on logging roads with no railings, boulders in the way, steep grades, and drainage trenches formed along and across the lane so deep that we got several 4WD vehicles stuck.

Observation: Tell the first timers to bring a 4WD vehicle - as long as they know how to drive it. Else, get a ride. I brought my 4WD Suburban only because it was all I had, lucky me.... I wasn't warned. I didn't get stuck, either. The guys who didn't bring the right wheels are unexpectedly carpooling and cramped or riding in pickup truck beds eating dust.

There was still snow on the ground - in August - and the trail in to the lake was a bit obscured. The group got separated. Even the main group was lost for a while before we figured out where the lake was, costing us over an hour of daylight. We're carrying everything we need from tents and clothes to 3 days of food and related survival supplies on our backs. Upon arrival it was discovered that three teenagers were not present. It was about 1730. A short search was initiated but soon abandoned due to deteriorating light conditions. They had everything they needed to survive with them. Mind you, the entire group was made up of men and their sons. Hence, being cavalier manly men, we were not overly concerned and decided to just sleep and try again in the morning. Good thing cell phones didn't work up there, else the Moms would have made it up those logging roads in their Hondas, PT Cruisers and minivans... divots, potholes and truck-eating trenches be damned... and the search would foolishly have continued all night.

Observation: Keep the group single file, in assigned order, with hikers in sight of each other at all times when hiking in with invincible men aged 7-70. The boys were found after a short search the next day, unharmed and amused at the event. It worked out. Some of the Moms still don't know this happened.

When the organizational emails started floating out a couple weeks ago, I told them they better warn the new guys to bring 4WD rides. That word got out. It was also stated that due to last year's issues, that the group would by golly stay together from the caravan out of town to arrival at the lake.

And left totally useless maps for the rest of us to follow. I mean, I've seen crappy maps, but these were Use Less. Written directions that referred to roads not identified on the map, and arrows on the map with notes that did not match the written directions. As a joke it would have been funny, but a joke it was not.

Observation: When taking a group that contains newbies out into the wild and breaking the promise to keep the group together, at least leave ONE experience guide behind. A couple guys sort of appointed themselves as leaders, who had been out there a few times. I didn't know better at this point. We caravan'ed out there. Dodged boulders, etc. Then, inexplicably, turned around and backtracked over 30 minutes (one more hour of daylight gone), and finally went up another tricky logging road. Just as we entered this new road, the caravan stopped while the first driver removed an intact and mostly clean rib cage, spine and skull... from a deer, I suppose... out of the middle of the road. Cool. As we drove past, I intoned to the guys in my ride dooooom! Gooo baaaaack! Doooooooooooom!

Little did I know.

We arrived at the end of this road and it was nothing like where we stopped last year. Ummmm, where are we? The field commission leader-Dads have huddled with GPS gadgets and maps, looking like all business. They have a topographical map, and have decided they know a better way to get there than last year's 1.5 mile hike over hilly terrain. I look at the map and see a bunch of lines really close together between where they think we are and where we are going. You and I know what this means. But I'm still a new guy, and keep my mouth shut.

Observation: When something looks seriously stupid, say something and head off the stupidity. They led us immediately up this seriously steep incline. I am totally not exaggerating, we're talking about well over 150 yards of 35° to 40° incline, cutting trail in forested terrain with branches and debris and loose soil, with heavy packs on our backs. I was using my hands to climb by just reaching in out in front to grab roots and stuff, it was that steep. The oldest guy in our group abandoned his pack pretty early. I was dying, and we had little kids with their heavy packs crying, slipping, falling down trying climb over fallen trees....

Then we got to the top. A 10' cliff straight up. We were so busy watching our footing that no one looked ahead. Now what? Who is in charge and led us here? My kid is stoic and keeping the struggle to himself, even though he is normally the emotional type. I was pissed.

By the grace of God we were able to traverse laterally a ways and find a crag where a couple of nimble guys scrambled up and then helped the rest of the group make the peak.

We then proceeded to break trail through heavy undergrowth for the next hour or so and then came out:

With the trucks of those two guys who left early parked in it.

I haven't been that angry in quite a while. I don't really have words for it to put in here.

The hike in from there was uneventful, but a darn sight easier than I remember from last year, having been tempered by the Hillclimb from Hell. The drivers hiked out the next day, unencumbered by the packs, and moved the vehicles to the proper location, via very indirect and winding gravelly mountain roads. So much for four hours of the time we had planned to spend with our boys on the lake. Except... my kid (bless his heart) made the hike with us to retrieve the abandoned pack and get the trucks. He was in front nearly the whole time, for miles, and never lagged. Did I mention that he had already been up since 5AM, when he went fishing and left me sacked out? What a trooper.

Observation: If you don't know what you're doing, just say so and try to keep from screwing things up worse. I can get there on my own now. I will be asserting myself as an organizational leader next year to head some of this comedy off. If those moves are met with resistance, I'll just stay home and take the whole family some other weekend, and let those guys go off to their folly again. Never underestimate the power of a large group of clueless invincible men who think they can read a compass, think they know how to survive in the wild, and become all-knowing guide-gods just because they possess the unharnessed power of a $300 GPS widget.

I know a couple of power dispatchers and quite a few firefighters who suffer from related maladies. They need help, too.

I am not a survivalist nor super-avid outdoorsman. The difference is... I know my limits.

Still, I guess we had a good time:

Arriving at the lake: 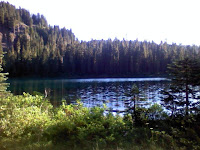 My son fishing on the lake Saturday night: 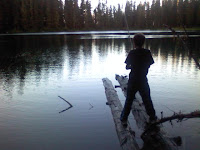 Cooking his catch right on the fire, to heck with the cookware: 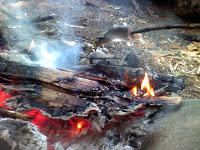 Muttered under his breath by The Grumpy Dispatcher
Email ThisBlogThis!Share to TwitterShare to FacebookShare to Pinterest