The power dispatching world is a small one, a very tight community.  I've bounced around a little, as have many of us, and I now know folks in dispatch and operations management all over the country that I have worked alongside literally or figuratively.

The best power companies have an internal family structure very much like the fire department, very familial.  You work with the same two or three guys on a shift for years, it gets that way.  And you bitch about guys on the other shifts who don't clean up or put things in the wrong place.  Sometimes we can get pretty owly with each other about the dumbest things, but none of us would bat an eye at loaning a car to each other or families sharing a cabin for the weekend.  Sound familiar?

For that reason, when something bad happens to a member of the extended family nearly anywhere in the country, just like in the online fire community, it tends to impact someone you know within a degree or two.

Last week the Bonneville Power Administration lost a lineman out on the west coast, near Spokane I think.  He fell from a transmission tower during routine maintenance, and while he was wearing a full harness it is not clear what went wrong yet.

I know the feel in the dispatch center when you get that first frantic field call of an injury to personnel.  Of hearing voices on the radio you're familiar with remaining calm but with that edge that tells you its bad.  Just like the fire service.

Word started to filter around, and I got an email from a colleague the same day.  The name sounded a little familiar, and I couldn't figure out why.  I went to Facebook to contact a former colleague and old friend who dispatches for BPA now, because standard response for all of us is to pass the hat for the family, to get the details we needed to help out.  And right there in his short list of friends on his profile was the fallen lineman.  Probably where I had seen the name before, I guess.

He had just celebrated his first anniversary earlier this month, and his wife is expecting a son.  These never get any easier over time, fire or utility LODDs, but it helps knowing that in this kind of organization (just like fire), his wife and son will be well cared for by the brethren.

My BPA friend emailed over some pictures from the procession today.  The colors of the trucks are different, but the emotion is the same.

Rest easy Matt, your brothers will take it from here. 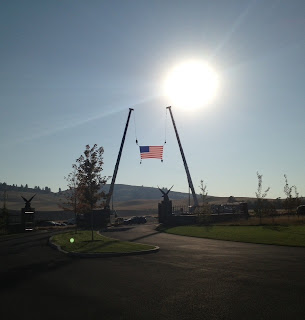 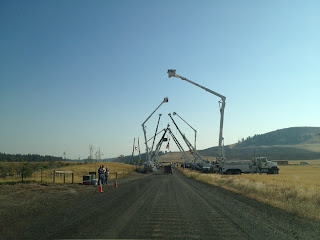 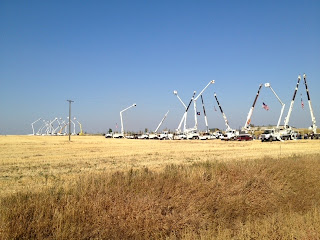