The weather radio chirped to life with a storm warning, possibility of hail, winds, tornadoes, all that cool stuff.

The skies were clear above, but ominous dark green to the west where the cloudy front was advancing from.

The family was out of town, just me around for work, so I headed up to the station to wait for something interesting to develop. A few other guys also appeared there.

We were standing outside on the apron, bay doors open, watching the gloom overtake us, listening to the distant constant dull roar of thunder. And then flash-BANG! That was a close strike! We were all sort of whoa, that was cool. We were being pretty dumb about it, though, and didn't go in. There was no rain or even any wind to speak of. Yet. Less than a minute went by, and flash-BANG! again. OK, time to find shelter.

Medic 61 was just clearing the hospital as we regrouped under cover. And then it started. Pow. Pow. Pow pow. pow-pow pow pow-pow-pow... the hail! And this wasn't regular storm hail. It didn't start small like pea gravel and just make a bunch of noise. No, we skipped the preliminaries showers and rain and little hail, and went straight to golf ball hail. 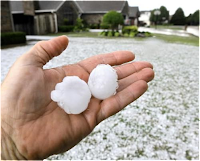 That was my first experience with a good oh-crap hailstorm. It was deafening. It was beating the absolute crap out of everything in sight. Medic 61 rounded the corner and we scattered as they dived into the bay head first to escape the beating. The windshield was starred in two places, and the light bar housing was cracked, not to mention the pockmarks on the hood. Holy crap!

The captain did not wait for word from the NWS, he just went over and activated the tornado sirens anyway. Hail this size comes from a specific pattern of moisture and thermal air currents, and is fairly good indicator of tornado risk.

The hail lasted just a few more minutes, but it came down so heavy that the ground was completely covered. It looked like a couple inches of snow at first glance. A layer of ice chunks entirely covering the ground is a sight to behold. 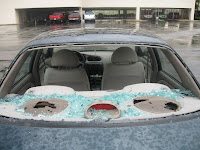 After it quit and we were outside marveling at the debris, and bemoaning the punishment dealt our personal vehicles (my windshield was utterly destroyed while others completely lost tempered side and rear windows here and there), unsurprisingly the 911 calls started coming in. As we pulled out in Engine 61 to investigate the cause behind an automatic alarm (hmmm, I wonder what set that off?), it was surreal to watch Medic 61 back out of station, lights flashing, to check out someone who had been caught outside in the hail. Never before or since have I seen a fire rig come out of the station backwards to answer a call.

Summer hailstorms. They'll mess up your town and destroy your cars. Been there. Done that. Didn't bother with the T shirt.

(images from similar storms kyped from the internet)