What Has Been Seen

I was filling in for a career guy and assigned to the first-out three-man Medic unit as the driver.

The lights came on and the beeps nonchalantly rained down from the ceiling speakers. Stabbing, situation unknown, at the truck stop next to the interstate. Well, that certainly sounds like an interesting job. Here we go. The dispatchers didn't have much additional information other than that a female had somehow suffered stabbing injuries of unknown severity, and there was no info on the perp at all.

The PD arrived well ahead of us, and waved us in unhurriedly as we rolled up, indicating the situation was safe. At least as far as they could tell, which is good enough for us.

We were led by an employee to the women's restroom, where we found an older and "well-worn" female subject sitting on the floor, leaning against the wall under the paper towel holder. Two officers were collecting information from her. Her shirt was somewhat bloody in front over her abdomen, but she was CAOx4, her color was good, and she looked rather irritated that we showed up. And the room was now pretty cramped for space.

Now I don't know how many of you all have really been around truck stops beyond the peripheral vacation gas fill-up and sugary snack to stay awake. This particular truck stop is a large complex, with a separate fueling island for the big trucks located away from the main restaurant/gift shop/convenience store. It also has a large truck maintenance facility, truck wash, etc. Big place. Proportionately, there are usually perhaps 300 or more trucks parked in their sprawling parking area at any given time. Huge. And with that many trucks come that many drivers. And with that many drivers comes the services that those drivers can financially support, legal or otherwise.

Our patient was one of those "providers". Truck drivers do not exactly draw the attention of high priced providers. There is a reason that these providers are derisively called "lot lizards". It is a sad and tragic place for these women to end up, but they do what they have to for survival or to support their habits. And no matter their station in life, they deserve respect and equal care from us, so here we are, and there she is, bleeding on the floor.

But why is she so angry to see us? A profanity-laced rant comes forth. In a nutshell, she's offended that there are now five men in the restroom who are "only there to watch while she takes her shirt off". We're a bunch of pervs, you see. 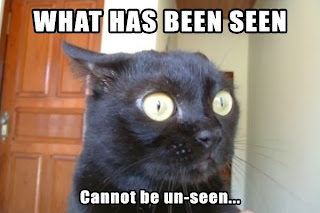 What has been seen cannot be unseen, and she hasn't even removed the shirt yet. I'm sorry, lady, but don't flatter yourself. Eeek.

So the medic stays behind with one officer, and the rest of us file out. There seemed to be no activity regarding finding the assailant, which struck me as odd.

We got the cot, she eventually walked out and sat on it herself. We loaded her into the box without incident beyond a contemptuous glare. I was happy to be the driver, safe in front.

Seems that at some point in years past, she had invested in her trade by getting breast implants, to help demand higher rates. Then, after a few years of that, something clicked and she decided to get them removed. And she decided to do it herself. At some point a few days prior, she used some sort of knife and made incisions at the bottom edge of each breast, making them as large as necessary to remove the implants. No anesthetic, no disinfectant, no sterile environment, no help, and no stitches to close them back up.

Wow. I mean.... WOW. Really? Just when you thought you'd seen it all, the job reminds you that you haven't and probably never will.

So, anyway, she covered the wounds with gauze and tape, changing them out periodically. I guess she'd been leaving blood on a lot of shirts for a few days, and someone finally noticed it who thought it prudent to call it in. Apparently it took some convincing to get her to agree to have it fixed properly at a hospital. She had wanted to decline transport and keep doing her thing. And knowing the culture of the truck stop, it probably didn't impact her business all that much.

There are so many words that apply to describe this one. I'm not even going to try.

Muttered under his breath by The Grumpy Dispatcher
Email ThisBlogThis!Share to TwitterShare to FacebookShare to Pinterest
Tags ems