It All Flashed Before My Eyes 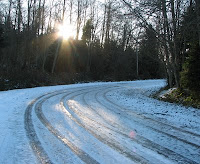 Driving Engine 51 alone after a snow/ice event, on an errand to swap out O/S equipment before the weather goes super nasty again. Coming down a grade, with a bend to the right, and a guardrail on the outside of the curve between the road and the gully. I've been creeping along and have disabled the jake brakes. And then, despite my efforts, 51 breaks free and I am sliding. Was this errand really a good idea? Cars are struggling up the hill and I will probably meet them at the curve and take them through the rail with me. I check the snugness of the seatbelt and try to assume I will survive.

I see 51 in the bottom of the gully, bruised, bent, and broken. I see hoses scattered out of the hosebed, tools out of the crows nest. I see guys trying to climb around in the brush to put down absorbent to catch as much of the leaking fuel as possible. I see the cab's US flag bent funny, and lots of the engine's exterior accessories smashed or missing.

OK, all four tires are sliding, I can't steer at all, so this isn't going to improve. I release the brakes and steer to the right, where there is a narrow ditch in front of the hill. Moving slowly to the right despite continuing side-slippage, the front right tire bites in.

I see a black-and-white picture of the smashed engine in the newspaper, and my name in the caption as the taxpayers are informed of just how expensive it will be to replace a piece of their fire protection fleet. I see the guys giving me crap about it months and years down the road. My new nickname, "Crash". Dubious comments of thanks for "arranging" for us to get a new engine. Stories told to the probies when I am not around, of what not to do. Told even after I'm gone.

With a tire in the ditch, I test for traction by tapping the brakes, and I feel the front right tire dragging in the ditch, marginally effective. I keep steering to the right, hoping the tire will bite into the hill some more. Not too much, or I'll go sideways, but enough to give me some more drag and slow me down. I'll take what I can get.

I see me filling out the accident report form, and sitting in an office with the Ops BC trying to explain how it happened. The Chief comes in and listens for a while, without talking, and then leaves without a word before we're through. I see my promotional opportunities being erased in his mind. Not that I ever wanted a promotion, but still....

I'm arriving at the bend, not moving very fast, but nowhere near slow enough to get all tires in agreement with having traction again. I pray the front right tire is deep enough in the ditch to hold the engine as we go around the corner, like when you were a kid on the little playground merry-go-round. The big kids would spin it so fast and you were holding on for dear life so it didn't throw you off. C'mon front right tire, I'm counting on you.

I see having to run with Engine 58 out of 51's for a long while, the POS reserve rig that should have been recycled years ago. It was a nice Seagrave in the late 70's, but it didn't age well. Its electrical stuff is possessed, sometimes the lights and siren don't work, sometimes it won't shift into pump gear, the compartments leak, seems like nuts and bolts are falling off of it even when it is not moving. But I run the most out of 51's and I will have to pay the price for smashing up "my" engine. Rolling up in the rattle cage E58 is just embarrassing.

The engine starts to make the corner. The cars coming up the hill are of course blissfully unaware of the drama taking place just ahead. Holy crap, I think I'm going to make it. Then the rear tires start to swing out, and I figure I am going to swat a couple of little cars over the railing with the back of the engine. I'm almost around the corner. Moment of truth. I release the brakes completely and turn into the slide. 51 goes about 20 degrees off straight, sliding to the left about halfway into the other lane, and then regains a hold of the road and I get back in my own lane. I leave a couple of wide-eyed drivers behind.

And one wide-eyed driver in the driver's seat of E51. Mother of God, I can't believe I saved it.

I see the Ops chief sitting in Engine 58, sternly looking at me through the windshield with a fistful of accident paperwork in one hand, newspaper in the other, lecturing me about the reckless foolishness of earning a nickname, and the POS engine with the fritzy light bar is backing into an anonymous darkened truck bay as his lecturing rant fades away into silence. 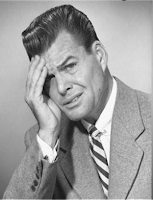 I've had two moments in life where my family, wife, friends, memories, all flashed through my mind when I had a really close call (neither were on this job). This time, as I looked into the barrel of doom on the job, all that went through my mind besides saving the rig was all the undesired paperwork and headache it was going to cause.

When I see bad things about to happen and the first thing I think about is the report I'll have to make, have I been doing this too long?