Sometimes there's nothing you can do

No one will ever get through. Regardless of their real age, they're like hard-coded teenagers stuck in the illogical non-comprehension stage, because they just know they're right. Yeah.

Don't even bother with the 2x4 to clobber them with, it just isn't worth your time.

When I moved into my place a few years ago, I was told one of the guys - we'll call him Sunshine - who lived farther in down our private road, automatically didn't like me because I was a firefighter. I represented The Man, taxes, and the all-seeing Eye upon his "misbehaviors". Whatever those were, as if I cared that much.

Give me a break.

We do door-to-door stuff, in pairs, as part of our community education and outreach. Naturally, I worked the area around my place with a partner. We share wildland defensibility info, hand out address signs and smoke detectors, make nice, and all that good stuff.

We tried to visit his place, he didn't answer the door even though he was home. Whatever, Sunshine.

Our road gets pretty dusty in the summer. I had Brush 51 out for a regular PM, and decided that instead of just running the pump for the sake of running it, I would set up the rear monitor and spray down our road with a wide fog, and then refill the 300gal tank off my private well. Rig needs road time, pump needs to run, doing a community service, and paying for the water out of my pocket because I'm a nice guy. I did this a couple more times as the summer wore on during very dry stretches. The pump-and-roll capability of the brush rig is a neat trick that Engine 51 can't duplicate. All the neighbors loved it.

Except Sunshine.  He complained to the brass.

Are you serious? It came back through the chain to me from a BC, who queried on what I had done without naming the complainer. Upon explanation, BC was cool with it. But I wasn't. I told the neighbors that someone had complained, and they all knew who it was. Told the neighbors that the wet downs on my dime were over, and they could forward their feelings on the matter to the source.

'The funny thing about firemen is... Night and day they are always firemen.'

I go out hunting and track it to Sunshine's place.

I go on in, ready to dial up the forces and give an initial size-up. Behind the shop, Sunshine is stretching a garden hose to attack the shell of a car he had apparently been cutting up with a torch. Don't ask. Somehow he controls the fire. He's not happy I am there, so I leave after some polite comments about making sure he was OK.

Last week, I hear from a friend who peripherally knows Sunshine from work. Did you make that fire down by your place, he says? What fire? It was right on your road, dude, didn't you guys have a fire down there?

I was around that weekend, and we had calls, but nothing around my place.

Turns out Sunshine went to bed one night, and after hitting the lights and laying down, noticed a glow between the cracks of the ceiling panels. Sunshine pretty much burned the entire ceiling cavity out of off his single wide, but drew on his miraculous madd firemans skilz and handled it with his trusty proven garden hose and chain saw, according to local lore.  Sure enough I go check out his place from the road and his entire roof is now tarp-covered.

I would have paid good money to watch that.

I thought I couldn't be surprised any more. But I am by this, it was pretty amazing. He never called 911. He just doesn't like us, or he's too dumb to realize that's what we do. So yeah, when he has a chance to capitalize on the services provided by the taxes he hates paying, he just goes solo anyway. Yup, that's a problem solver there, bud. 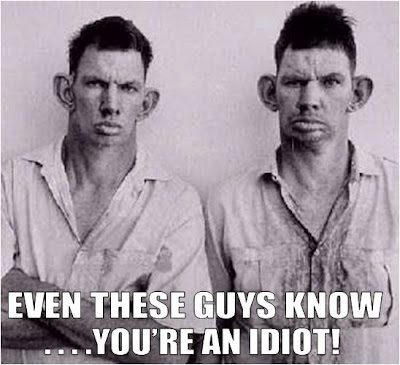 Yesterday, Sunshine and I happened to meet at the mailboxes at the head of the road. He complained that I didn't notice his place burning and wanted to know why I didn't come help him.

I had to pretend I didn't hear him, because I couldn't think of any response that would sound polite. Just listening to his question had already wasted too much of my time. Also, my power dispatcher attitude prevented me from finding a damn to consider giving.