It's been getting boring talking about math and meters, and about the ethereal nature of megawatts, which you cannot hold, observe, or really grasp in any physical sense. The wonders of Reserve Sharing Groups only turn the crank for dispatcher geeks, accountants and penalty-fearing compliance people. Let's move on to something tangible and different, to freshen the air.

Power lines. They're everywhere, above and blow the ground, so much a part of your life that you usually don't notice them. They come in all shapes and sizes, and to the untrained eye they are not always differentiated from other cables and wires strung around for various purposes.

To make sense of the different sizes and types of power lines, though, we have to delve ever so slightly into the technical aspects of power transformers.

And to get into power transformers, we have to poke at the terms 'voltage', 'amperes' (amps), 'watts' and 'ohms'. Dang, here we go with the boring/technical again. I'll try to be brief.

Let's convert those four things into the fire service world, applying what we know about the physics of moving water.

To move water efficiently and get the desired volume of water on the fire, you like good pressure and low friction loss in order to achieve a good flow rate. The same is true for electricity. The best efficiency to provide the desired amps and deliver the watts comes at high voltages with low ohms.

OK, we're past that boring definition part. That was quick, right?

Power generators typically produce electricity at anywhere from 6,000 to 14,000 volts depending on each station. Converted to industry terms, that's 6-14kV, and is about the same voltage used for residential distribution circuits running through neighborhoods. Voltages that low are not efficient at long distances greater than several miles, any more than trying to pump 1,000' of 1.75" attack line. You need to step up the pressure and put that water into some LDH (large-diameter hose), and bring it back down again near where it is to be used.

Bring in the transformer. 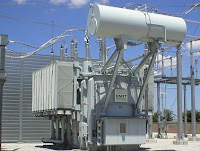 Without getting into its technical aspects right now, suffice to say that a transformer is what increases or decreases the voltage. Unlike the adjustable fire pump, they have a fixed ratio of conversion. For example, a 115/14kV transformer can only convert at that ratio. If its incoming high-side voltage, nominally 115kV, is reduced by 10% (to ~103kV), the outgoing voltage which would normally be 14kV will also be reduced by 10% (to ~12.5kV).

The concept of pressure regarding voltage also has to do with how far the electricity can potentially flash or arc to ground. Thus, the higher the voltage, the more clearance around the wires is provided and the longer the strings of insulators. Don't let the presence of only one or two insulator bells on a little distribution circuit make you think it is safe and small, though, as even the low end 6kV circuits can blow your arm off.

So, generators create power at relatively low voltages. The power stations have transformers that step up the voltage to efficient levels for long distance transmission, say anywhere from 115kV to 500kV, in some cases higher. High voltage = LDH. The network of high voltage transmission lines of various voltages generally comprises the "grid".

Finally, in those gray 'cans' attached to the power poles, or under green metal boxes on small concrete pads on neighborhood street corners, are still more transformers, which drop the distribution voltage down to something Firegeezer's coffee pot and all your other household stuff can handle, converting whatever is on the power line down to a reasonable 120 volts (which of course can still kill you).

What we learned: (1) Moving electricity isn't quite so mysterious once we apply the moving water analogy to it. (2) Transformers are magic, but not very flexible about how they do their magic. (3) Volts, Watts, Amps and Ohms used to be totally mysterious, but now makes total sense because the water physics analogy helps us make sense of them.

(Click this link to see all posts tagged "tutorial")


Muttered under his breath by The Grumpy Dispatcher
Email ThisBlogThis!Share to TwitterShare to FacebookShare to Pinterest
Tags grid, tutorial